The first Bed and Breakfast a Vietri Sul Mare eco-friendly 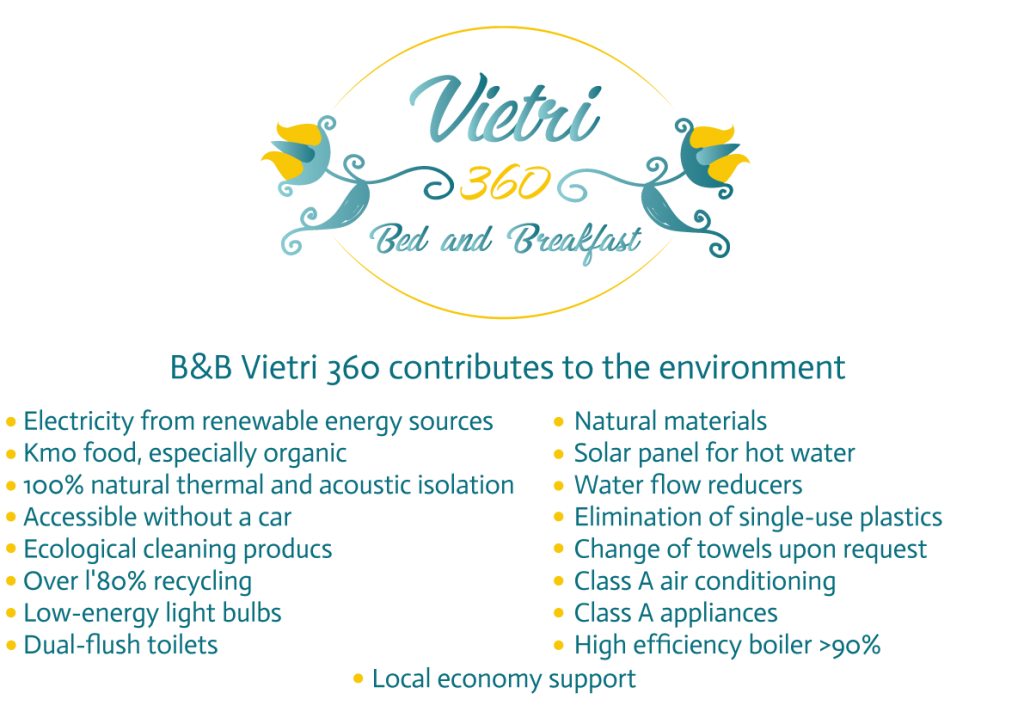 The idea of creating an eco-friendly b&b comes from our commitment to develop a sustainable tourism, doing our bit to protect the environment that surrounds around us. For the cleaning of rooms and washing up of crockery, we only use ecological products with a low environmental impact. For the apartment renovation works between 2017 and 2018, we have chosen natural materials provided by certified companies whose policy is based on the respect for the environment. In order to minimize heat loss, reduce temperature fluctuations and increase the heat storage capacity, cork has been applied to the perimeter partitions of the house. Cork is an excellent thermic and acoustic  insulation, 100% natural, biocompatible and completely recyclable, nontoxic and hypoallergenic, allows the rooms of our b&b to breathe avoiding the formation of condensation. In addition, in case of fire, it does not propagate the flames but burns until extinguished. For the furniture, beds and furnishings have been handmade for us using solid wood which is a strong, natural and sustainable material (being 100% recyclable) and applying nontoxic glues. Windows also feature natural and sustainable materials: weather-resistant aluminium on the outside and naturally insulating wood on the inside. For the production of

warm water, we have installed a solar thermal system: the energy produced by the sun is used to heat the water through a panel located on the roof. The solar power is a clean and inexhaustible supply of energy whose exploitation does not produce CO2 or other polluting agents that cause the growth of the ozone hole or contribute to the greenhouse effect. In order to reduce our environmental impact, we rely upon a company that provides 100% green energy, certified by a guarantee of origin. For breakfast, we only offer km0 products, mainly organic.

Vietri is known throughout the world for the production of ceramics characterised by lively colours whose first evidences date back to the XV century. The deep blue of the sea, the bright green of Mediterranean vegetation, the golden orange of citrus seam to meet in Vietri, in the glazes and decorations of ceramics that adorn every corner of the village. Vietri is also called “the first pearl” of the Amalfi Coast because it is the gateway to the Divine coast. Less famous than the overcrowded Amalfi and Positano, in the last few years it has become well-known among niche tourists who prefers to stay away from the crowds, keeping the authenticity of the classic Italian “borgo”. In Vietri, you will dive into its ancient history dating back to the Seventh Century B.C. Vietri was , in fact, founded by Etruscan and played an important role as trade centre with its ancient port. You will see the ancient art of ceramics first-hand and will lose yourselves in the alleys beautifully adorned with majolica. You will find culture, sea, good food and a great hospitality. What more can you ask for from a holiday? Easily reachable by car thanks to the motorway exit of the same name (the only town of the entire that has one) and easily reachable both by buses and trains (also in this case, the only town of the coast that has a train station). Its strategic position makes Vietri the perfect destination for those who wish to visit the heritage sites but, at the same time, do not want to give up on the charm of staying in the enchanting Amalfi Coast. From Vietri you can easily reach all the villages of the coast taking the panoramic Amalfitan SS 163 road, or through motorway, the close-by Pompeii or, if you prefer, visit the ancient Greek temples of Paestum. Moreover, from the close-by port of Salerno you can take a ferry to the isles of Capri and Ischia.

If you chose Vietri for your holidays, you absolutely need to stay at B&B Vietri 360. Located on the second floor of a 1700 building in the heart of Vietri, our B&B will be a perfect base for your itineraries. You will find a warm and pleasant atmosphere that, added to our professionalism, will make your holiday very special. The B&B Vietri 360 has three spacious and bright rooms, each with private bathroom and small balcony overlooking the characteristic alley that takes to Vietri’s cathedral. Each room features free WI-FI, LCD TVs, and high-quality mattresses to guarantee a good sleep and fully satisfy even the most demanding guests. Furthermore, we have chosen to make each room truly unique combining stylish modern furniture and Vietri’s traditional ceramics, balancing spaces between form and function. Finally, for a pleasant awakening, you will be pampered by a rich and variegated buffet carefully selected in order to offer you the best local and organic products.